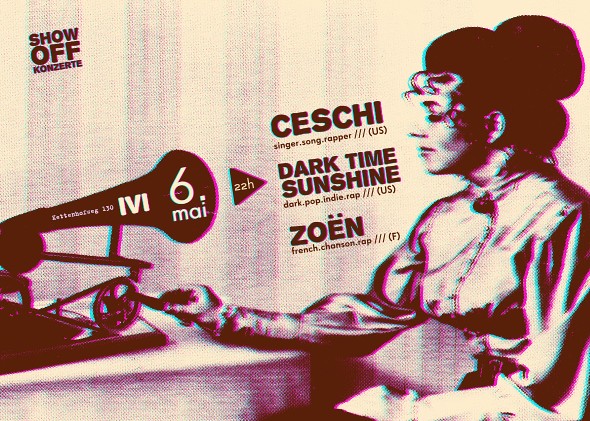 Ceschi (pronounced Chess-key) Ramos is a song writer. He commonly plays acoustic guitar and raps big words really fast in melodic fashion but he also produces beats, plays many other instruments and occasionally screams. Over the years he has been part of many bands including Anonymous Inc, Toca (with Xololanxinxo and Tommy V), Dead By Wednesday and Deadpan Darling (with Blue Sky Black Death).
But most of us know Ceschi Ramos best as a one man band.
Drawing from the experience of these groups, he ignites crowds around the world with simply his acoustic guitar, a laptop and the bravado of his dynamic voice. From quiet and playful indie folk ditties to literally pushing the audience, spitting fast-chopping raps; Ceschi embodies the spirit of a true showman – proving to us that one man can do it all.

Dark Time Sunshine is comprised of Onry Ozzborn of Grayskul (Rhymesayers) and producer Zavala. In April 2010 Dark Time Sunshine released their first full-length LP, the acclaimed ‘Vessel’ (Fake Four Inc.).
With two superb releases and extensive touring in the U.S. with the likes of Sole and the Skyrider Band, AWOL One, Pigeon John, and DJ Abilities, Dark Time Sunshine quickly became an indie favorite and ‘Vessel’ became one of the most well received hip hop albums of 2010. Dark Time Sunshine’s performance at Soundset 2010, one of indie hip hop’s most celebrated festivals, continued to increase their fanbase and expose new listeners to ‘Vessel’, often referred to as “psychedelic Gang Starr”.

Sometimes French song, sometimes new wave, a soupson of folk music and a touch of madness, zoën delivers a rather atypical hip hop. Rather personal, intimist texts, they are an executory truth for this young french MC and Beatmaker. His first solo album will be released on Milled Pavement Records in February 2010. And he’s actualy working on a production album featuring Ceschi Ramos, Soso , Noah23 and more.